We arrived at the airport the next day after a long flight. All the host families were waiting for us with placards and presents to welcome us.

Before leaving the airport with our host families, we were intimidated and glanced at each other… On the first night, some of us had difficulties sleeping because of the jet lag (-8 hours).

We were immediately struck by the size of everything. Indeed, their houses are much more spacious than ours, and their cars are much bigger than in France. Another big difference between the USA and France is that American teenagers can drive their own car when they turn 16…

All the host families were very welcoming, they always took the time to explain things to us, they really made us feel at home. As Albuquerque is not so far from the Mexican border, there is a strong influence in their cooking : it can be very HOT, from spicy enchiladas to burritos with green and red chilli…. 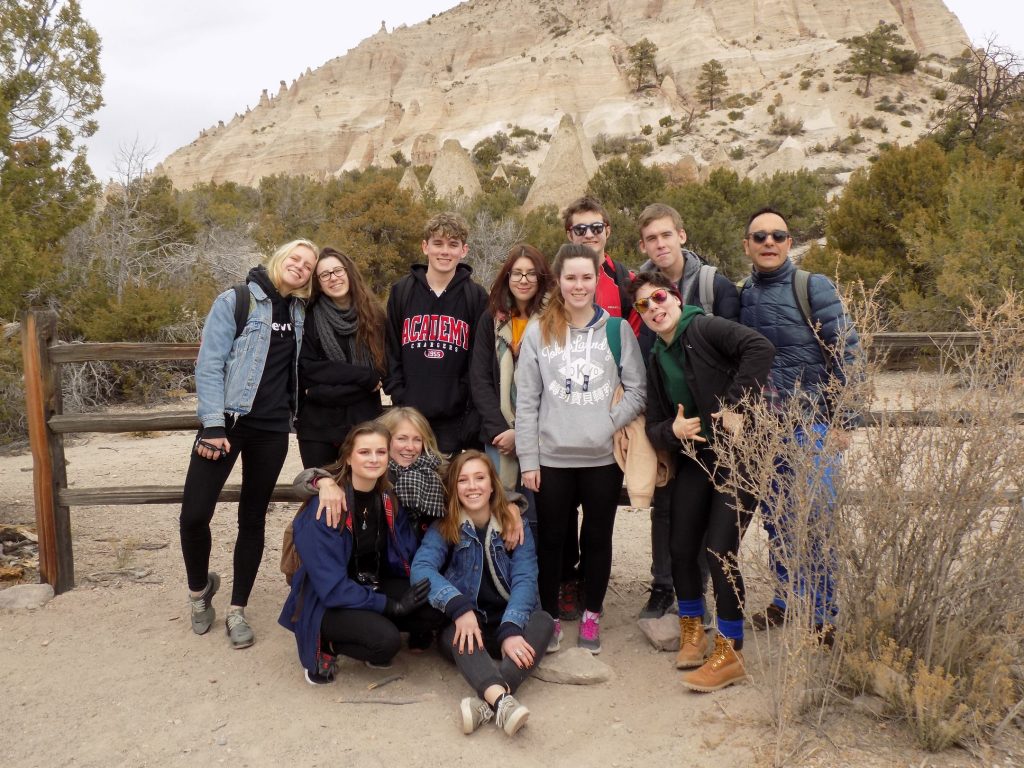 At first glimpse, the most striking thing about the Academy’s campus is the size. Compared to Jean Mace high school, it is huge ! The Academy is truly spread out over a large plot of land, and most buildings are far away from each other. As a consequence, students have to walk a lot during school days. All these buildings have a different purpose : some of them are dedicated to Arts, Sciences or to a specific grade. Therefore, most students usually have all their lessons in the same place. The campus is very pleasant. This feeling of well-being is reinforced with the presence of many sports facilities (track and field, tennis, swimming, football,…) where most students often train. In addition, the Academy provides its students with comfortable classrooms, common spaces where everyone can relax during spare time and even a bookstore where students can buy some food, drinks and clothes displaying the colors of the local sports team, the Chargers. Another important part of the school is the library, where you can consult over 100,000 works. The cafeteria, situated in the center of the campus, provides students with a large variety of food, from salads to Sloppy Joes(a sort of burger), without forgetting the many drinks available (milk, soda, naturally-flavoured water). The theater and the auditorium are other imposing buildings, where cultural events are organized on a regular basis – for instance, on the second day, we had the opportunity to attend a conference about the Middle-East.

On the first day we went on a treasure hunt to discover Albuquerque Academy, our new high school ! Then we went to class with our academic hosts and we noticed many differences. School starts at 8 am every day and finishes at 3.32 pm. There are not as many students in their classes as in France : 15 students on average ! Could you imagine being in a class with only 15 people ?! Moreover, could you imagine being in a class that you have chosen to be in ? As there are not 30 students per class, they have a really different relationship with their teachers. They talk to each other in a very friendly way, as if they were on the same level. In addition, when they are absent, they can go and see them and have a personalized lesson to catch up. Depending on the class, they have more freedom than French students, they can eat, drink, listen to music and even stand up and leave the class. They are responsible for their own learning. After school students can take part in clubs, they can do a lot of extracurricular activities, like Clara’s host, Brian, who does dancing, Lauranne’s host, Robbie, who is a member of the philosophy club (which he created), there is also the debating club and the choir among others. With all those different clubs, students know each other very well.

When you start high school you can choose your subjects for the rest of the school year. You can choose between different sports such as yoga, dance, softball, swimming, baseball, tennis, American football, running just to name a few. The students also choose their languages, from Chinese, Spanish, German, Japanese, Arabic, Latin and of course French! Since students choose their subjects there are never the same students in a class, so you always meet new people. In a day they have seven different periods (classes) and their schedules cover nine days, they have shorter lessons (45min) and longer lessons (1h30), and some students who are in the choir for example can even start at 7:20 am. Unlike French students, they don’ t have any breaks and only get 20 minutes for lunch. They are not allowed to leave the school campus during the day. 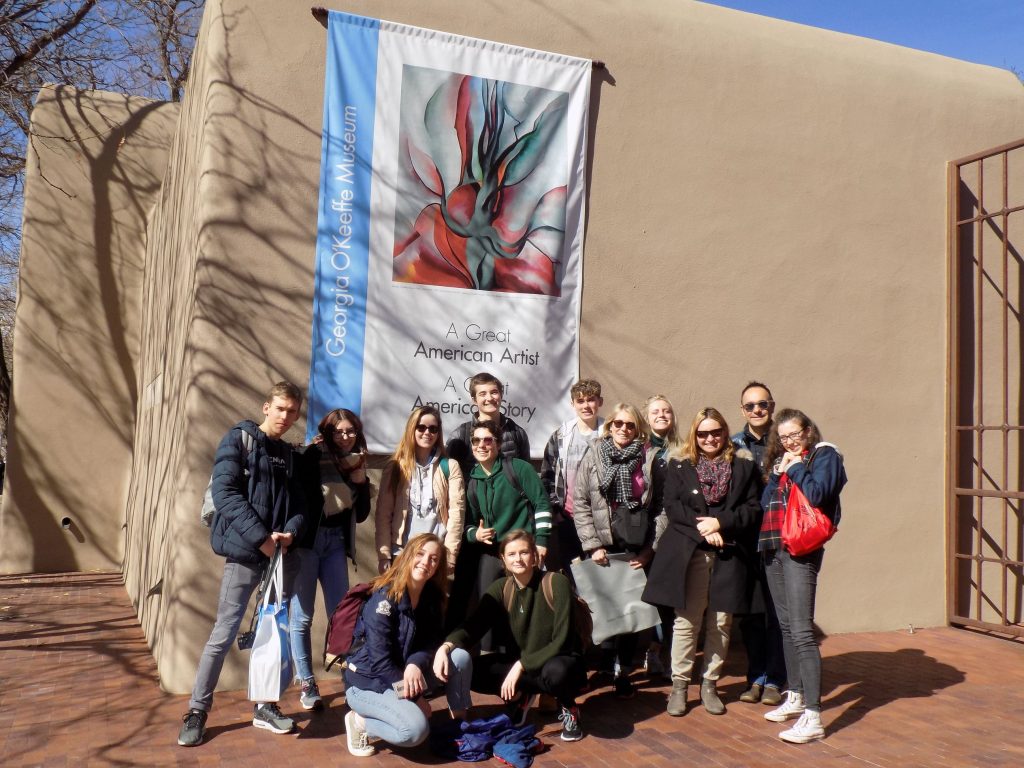 We spent a lot of time at school to discover the American school system, but we also went sightseeing : we discovered Albuquerque and its Old Town, some of us took the tram to go up to the top of the Sandia Mountains. We also went to Santa Fe, the capital city of New Mexico, where we visited the Georgia O’Keefe Museum – Georgia O’Keefe is an American painter from New Mexico. We visited the Museum of Indian Arts and Culture where we learnt how to weave like Native Americans… We went hiking in Tent Rocks National Monument.

We are extremely thankful for this exchange because it was a memorable and priceless experience thanks to our hosts and their families, Albuquerque Academy and its very friendly faculty and our dear teachers Mrs Le Faouder and Mr Allain.